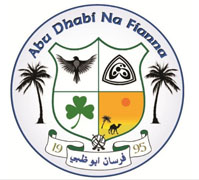 Abu Dhabi Na Fianna GAA Club, established in 1995, is the largest GAA club in the Middle East region. The club competes annually in the Middle East League and Championship competitions -which take place in a host of Middle Eastern countries. The club is affiliated with Zayed Sport's City and currently trains there on a weekly basis; in addition to regularly hosting rounds of the Middle East League and Championship at the venue. The club currently has approximately 500 members comprising of adult players, social members and an ever expanding juvenile (family) section. Abu Dhabi Na Fianna GAA is an inclusive club offering hurling, camogie, ladies' Gaelic football and men's Gaelic football. The club strives for inclusivity ensuring all players, regardless of ability or indeed nationality, are catered for on an equal basis. The club has a number of generous sponsors including Park Rotana, McGettigan's, Workaway Recruitment, Haddins Fitness and the Sportsman's Arms. We are sincerely thankful to each for their continued support.