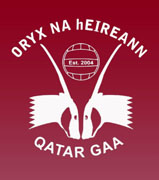 Founded in 2004, Qatar GAA has developed to become one of the most successful clubs in the Middle East and Asia. The club boasts numerous league and championship wins in both hurling and football for men and ladies. Perhaps our proudest moment was winning the Asian Gaelic Games tournament in 2013.

We take great pride in the fact that the club has never lost the sense of community that comes with being a member of the GAA in Ireland. For us, Gaelic games are not just about football and hurling, but about the people and lifelong friendships that are made through playing the sport in Qatar.

The club has around 200 members and a thriving juvenile section, with both featuring players not just from Ireland, but also from the USA, Brazil, and Germany to name just a few.