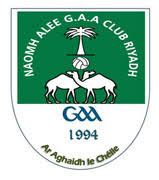 On a Sunday and Wednesday night, just after the sun goes down, it’s not uncommon to hear the thump of a football boot on a size 4 and size 5 O’Neill’s football in any village, town or Parish in Ireland.

But in the middle of a grassless nation, with its unique traditions and escalating temperatures, this is more exclusive. And yet for a quarter of a century, this has been evident among the dunes of Riyadh as the Gaels of Saudi Arabia ply their trade….in training for the upcoming GAA season.

Things are different for the GAA players in this region. Access to any sports-field, let alone grass, is difficult to find. And training or match sessions that involve men and women in a single venue is not readily accommodated in the homeland of Mecca and the heartland of Islam.

Non-the-less, for 25 years (and more) there has been an active and enthusiastic group of men and women, ranging in age from twenty to seventy, who ‘religiously’ profess their affiliation to and affinity for the codes of the GAA.

From 7:30pm on Sundays and Wednesday’s and from 10am on Friday’s (the Sabbath), these avid proponents of the GAA gather in their thrice weekly training sessions:

Because in reality, while this might be 6,000 kilometres from ‘home’ it is still essentially ‘the same’

And it all started officially 25 years ago, in 1994. At a time when the Middle East was not the chosen destination of the Irish diaspora, a handful of Irish pioneers were forging new business practices, new business models and new lives for themselves in the Arabian desert.

They were agri-engineers with ‘Mastock’ now ‘Al Marai’. These innovators would go on to create the Worlds’ largest dairy herd, in the absence of a blade of grass; they were medical professionals who would establish a pedigree of excellence in the field of Medi-care; they were financiers and construction professionals – surveyors, engineers and tunnel builders who would literally transform the very landscape of this oil rich nation

And in the true spirit of the ‘pioneer’, these celtic men and women brought with them something of their own culture, in addition to the traditional honest work-ethic of the Irish diaspora.

Just as the overseas Irish had brought their culture, music and traditions with them to Britain, the America’s, Australia and New Zealand in post famine 1800’s and the early part of the 20th Century, so too this ‘New Diaspora’ would plant the seed of Irish Culture in its multitude of ways. For many, perhaps most of them, it was through our native games – Gaelic games.

In 1994, there was no Irish community within which to nurture the seed of Gaelic Games in Saudi Arabia – nor across the broader Middle East. It simply didn’t exist. This was the literal ‘GreenField’ project (or more appropriately – a ‘Red Sand’ initiative).

And so, the ambitious few, including Charles Sullivan, Donal McCarthy and Johnny Rae took it upon themselves to organize the burgeoning Irish community in the region, and express themselves through sport. And in 1994, the establishment of Naomh Alee GAA Club in Riyadh and Naomh Abdullah Gaels in Eastern Province (Dahran) marked the beginning of formal Gaelic Games in the Arabian Peninsula.

Initially a ‘small-ball’ club, noting the southern and particularly Cork heritage of the ‘founders’, the early years saw Hurling and Camogie dominate the exchanges between these two pioneering clubs. And in true diaspora fashion, the onward travels of Donal McCarthy to the UAE led to the establishment of the Dubai Celts and the ‘seeding’ of the broad Middle East GAA project.

Between 1994 – and the first affiliation of a Middle East GAA club to Croke Park – and 2002, Naomh Alee (and Naomh Abdullah in Dahran) flourished.

But ‘tempus fugit’ – and geo-political and economic challenges in the early ‘noughties’ saw the Irish population in Saudi Arabia diminish. A volatile political environment and regional multinational conflicts in Lebanon, Iraq, Kuwait and later Syria resulted in material challenges for the Riyadh based GAA club. Indeed, it proved ‘terminal’ for Naomh Abdullah, who would later merge with the Bahrain Irish Gaels to form the Arabian Celts of Bahrain.

But the Riyadh Gaels were resilient, and they pushed ahead through difficult times – keeping active locally with occasional engagements across the region with new and emerging clubs across the UAE and broader Middle East.

In 2009/10, ironically following significant ‘economic challenges’ in Ireland, a new wave of migrant Irish found their way to the Middle East and to Saudi Arabia.

These were different ‘Irish emigrants’ to the more traditional 1940’s version. These were young, dynamic professionals, who had seen Ireland cement its place as an influencer of world business through the Celtic tiger years….and they would take that philosophy and shape their new destination of choice. And that ‘choice’ was now the buoyant - oil rich - Middle East.

A new Irish diaspora fuelled the slumbering GAA community across the region. In 2010, a revitalised Naomh Alee was formative in shaping a new competitive GAA Tournament programme across the region. The ‘old club in new clothing’ didn’t win a tournament in 2010, but it was there – primarily now a football club – and it was making finals.

In 2011 and in 2012, the boys were winning matches and the girls were on field and competing. By 2013 and 14, the boys were a recognised force and the girls were contesting finals. In the same year, Naomh Alee were at the forefront of the new Middle East GAA league and the even newer Middle East GAA Board. Within a year, by 2015, this new Middle East Board would host the inaugural GAA World Games in the presence of patron and new President of the GAA, Aogan O’Fearghail. Not alone this, but the Middle East would contest three GAA World Games finals (Elite Mens football, Elite women’s Football and native (non-Irish) women’s football) and would win two of them. And what’s more, Naomh Alee – the oldest GAA Club in the Middle East would have representation on these teams – as well as in the administration of the Games.

A year later, in 2016, the Middle East would retain its world title in Elite Mens football in Croke Park, and add the World Games Hurling title to its list of honours. And this time the Middle East Board would count both its Chairperson and Secretary from the Naomh Alee GAA Club in Riyadh. Added to this, the Riyadh club could count two more players representing the club and the Middle East in World Games competition.

In the domestic realm of Middle East Competition, it was the time for ‘na Cailini’ to shine.

2016, ‘17 and ’18 saw a new confidence emerge among the LGFA community in Riyadh, with immeasurable progress and progressive tournament wins.

But that elusive Middle East League title and Middle East championship eluded the lasses. Up until the 2017/18 season that is.

In the 2017/18 season, a remarkable sequence of games, running 22 games undefeated secured not one, but both League and Championship honours for the Naomh Alee girls – invincible in that season. And while not all seasons will be this way, it is illustrative of what focus, effort, ambition and no little skill can deliver.

With all games played ‘away from home’ because of the challenges for other clubs to enter Saudi Arabia, extensive travel - covering over 90,000 man miles in a season, was required. But this has NEVER been suggested, even once, by players or club officials as a reason to stand aside. It is what it is. We will endure, we will progress…we will grow.

Now in our Jubilee Year, with another Middle East GAA season completed, the oldest GAA club in the Middle East has secured yet more competition wins for both the men and women of Riyadh in the 2018/19 season. This season, five more pieces of Silverware made their way back to Saudi Arabia – two in men’s football, two in ladies football and one handball - from among the toughest of GAA competition outside of Ireland.

To this end, the club has fostered, developed and been instrumental in delivering the first GAA Handball competition in the Middle East. Now, in Jubilee year, we turn our attention back to its roots and toward re-establishing Hurling and Camogie as core components of this historical club

And not forgetting the youth - the Naomh Alee GAA Academy, supported by DCU - now in its sixth year of operation – and a staple engagement for Irish, Lebanese, Sri-Lankan, Saudi, British, Malay, Canadian, Spanish and the many more young nationalities who attend at Pairc Ishbilia.

In April and May 2019, the Gaels of Naomh Alee hosted An Iar Uachtaran Aogan O’Fearghail and Tomas Mulcahy as we celebrated 25 years of the oldest GAA Club in the Middle East. In July 2019, those celebrations travelled home to Ireland – to Dublin, hosting GAA presidents, GAA All-Stars and Ambassadors alike. After this, we returned to Riyadh, to prepare ourselves for the next quarter century of Gaelic Games in the home of the Prophet Mohammed.

In the meantime, the Naomh Alee GAA players will continue their preparationsfor the nest season of Middle East League games in the hot, dry climate of the Arabian Desert.